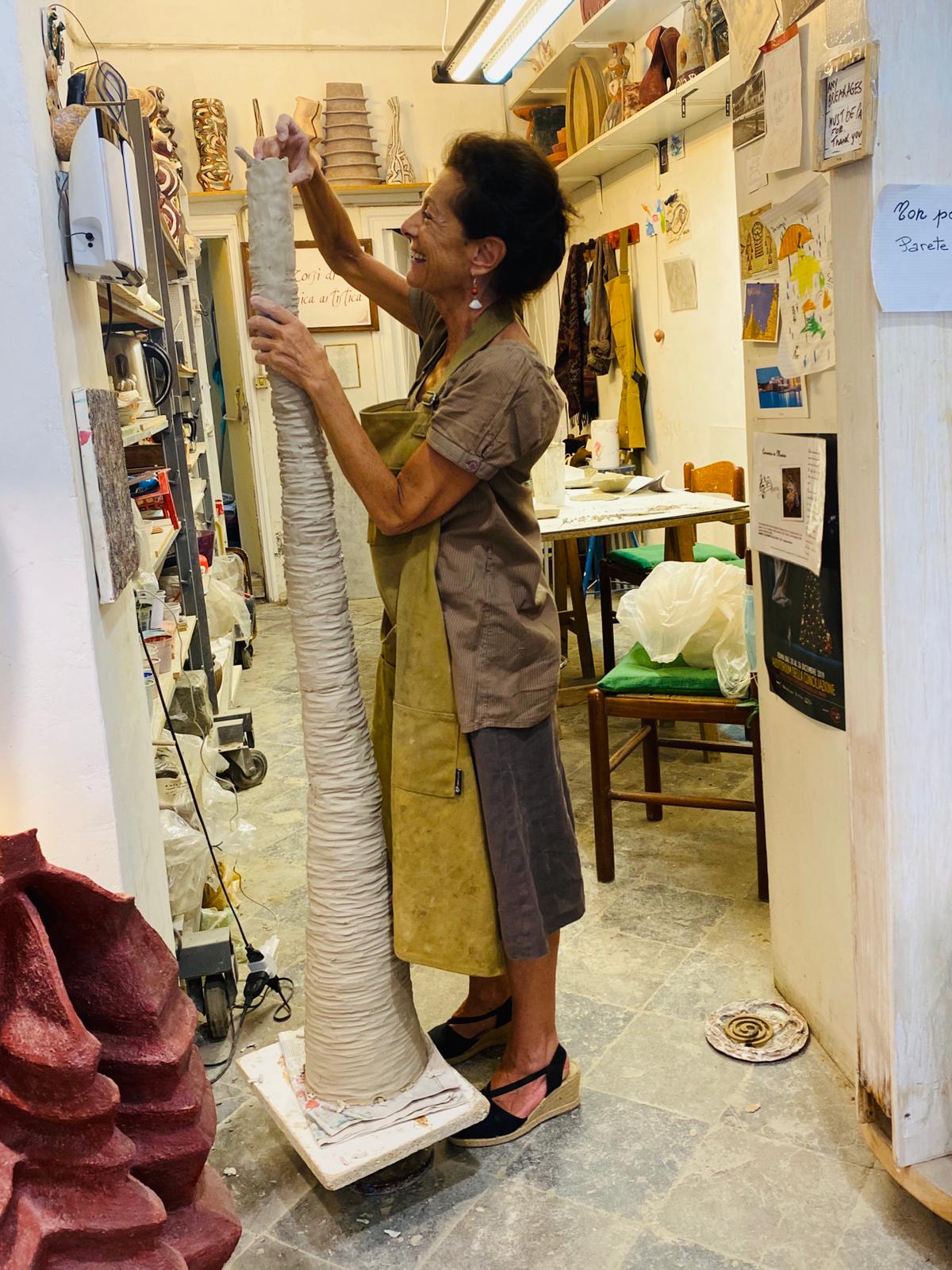 Who is Marina Gozzi

From August 1979, in Rome, she began to learn the techniques of working with ceramics at the laboratory of Siglinda Scarpa, starting a search for new expressive forms. These will lead her to the production of her first works and will be the constant impulse for all her artistic activity.

Her first collective dates back to 1980, many others will follow in the following years.

In 1981 she left Siglinda Scarpa's laboratory, making experiences and working in other ceramic studios.

In 1985 she left for New York, where she attended a specialization course on further ceramic manufacturing techniques.

On her return to Rome in 1986, she felt the need to transmit and share her passion with others.

Thus began her work as a teacher, both in her studio in Via Tor de Conti,16, and in a Montessori school where she taught until 1999. In the same year, on the occasion of the Jubilee, the Japanese magazine "Mises" publishes a service on her sculptress work.

In June 2002 she passed the selection for the International Ceramics Competition in Faenza and one of her works was selected for the Annual Exhibition.

In October 2002 she participated in the exhibition "Egyptian and Italian women in comparison" at the Embassy of Egypt in Rome.

In 2001 she exhibited her sculptures in the Arte Fuori Centro gallery.

In December 2001 she exhibited at the Joansen studio in via della Pelliccia in Rome.

In 2002 she exhibited one of her works in the Youth Section within the Casa Idea exhibition.

In 2003 she exhibited her sculptures at the Moka gallery in Piazza degli Zingari.

Since 2001 she has become part of the annual Open Studies event, organized by the Municipality of Rome.

In 2006 she participated in the Thirty-second Exhibition of the Casaidea.

In 2010 she took part in a collective exhibition at the Plurale gallery of S. Martino ai monti.

In September 2015 she was a guest with her works inside Palazzo Brancaccio, within the event organized by the Botteghiamo Association.

Some of her works are exhibited by Blen in via Margutta.

Her works are exhibited at the Lupigiada Cultural Association, at the Ceramics Museum in Cairo, Egypt. Private collections in Holland, France, Spain, Greece, Scotland, England, Germany and all over the world (Australia, Africa, South and North America, South Asia)